The TRACKs of Indigenous Americans 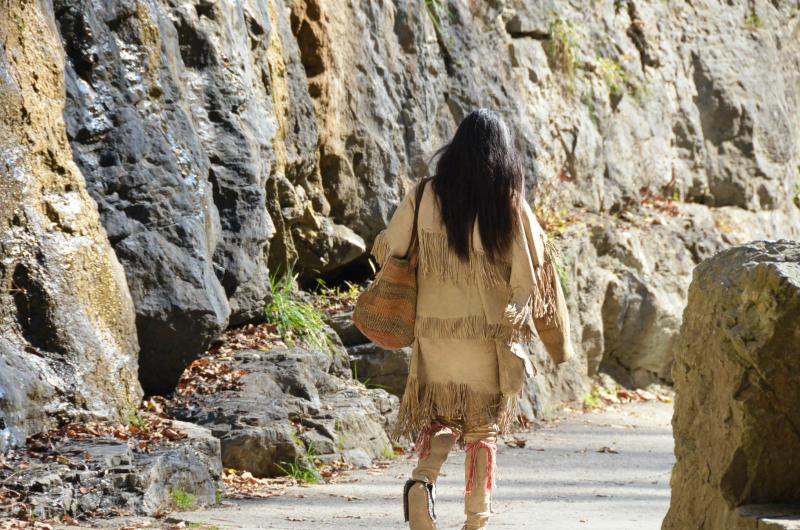 During November, Americans observe Native American Heritage Month. It is a time to celebrate the rich and diverse cultures of Indigenous Americans. We can learn about the traditions, histories, and contributions of Native people. As well as raise general awareness about the unique challenges Native people have faced historically and in the present.

So many of our nation's parks reside on what were once tribal lands, so we must recognize the long histories of the places we visit. We would love to explore the indigenous history of all the parks where our TRACK Trails reside. But it would be just that. ALL the parks. So, to start, we selected a handful of sites you can visit to begin exploring Indigenous American heritage when you go TRACK the Trails. 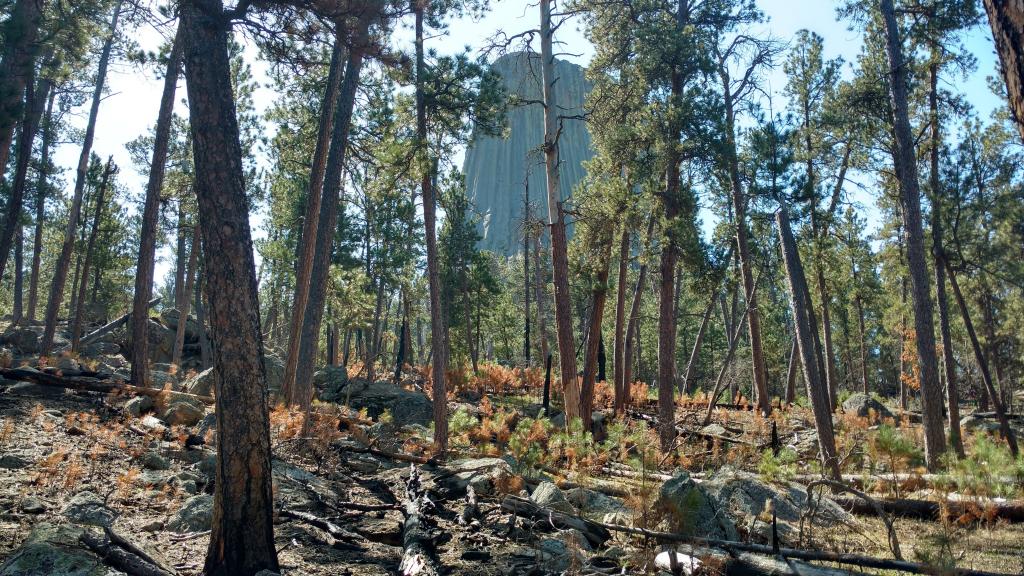 Sweat lodges, sun dances, and other religious traditions are still practiced at the monument today. Prayer offerings in the form of colorful cloth or bundles are also placed near the Tower. They are similar to ceremonial objects from other religions and represent a person making an offering, a request, or simply remembrance of a person or place.

For generations, this 867-foot phonolite tower has drawn people to the site, especially rock climbers, who have long caused tension with the local Indigenous Americans. As a compromise, the month of June is reserved for Indigenous Americans to practice religious observations without interference from climbers. This compromise, however, is a voluntary one and 15% of climbers still choose to scale the mountain during sacred practices.

Information sourced from the National Park Service. The Devils Tower TRACK Trail follows the Red Beds Trail which is a 2.8-mile loop offering wonderful views of the Tower and Belle Fourche River Valley. 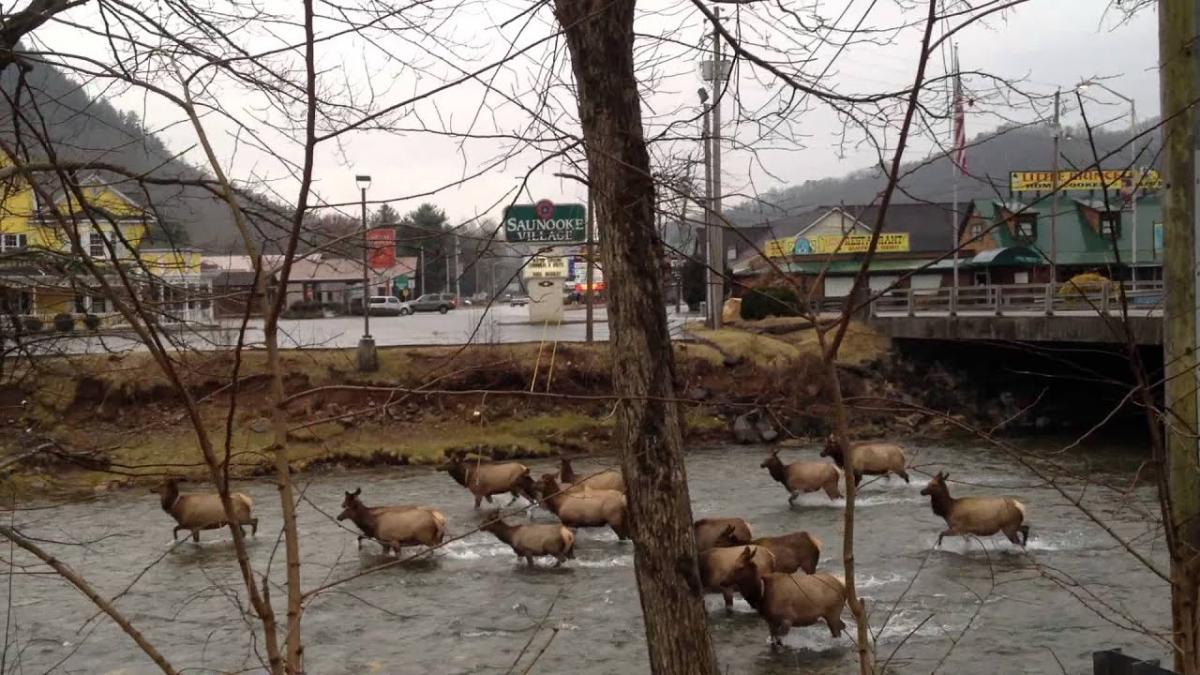 At the edge of the Qualla Boundary, lands belonging to the Eastern Band of the Cherokee, you can walk along the Oconaluftee River Trail from Cherokee to the Oconaluftee Visitors Center in the Great Smoky Mountains National Park. This trail offers several scenic views of the Oconaluftee, interpretive panels about Cherokee folklore, and three TRACK Trail brochures with elements translated into Cherokee Syllabary.

The Cherokee tribe was one of the largest tribes in the southeastern United States, where, by 2000 BCE, their culture spanned hundreds of miles of mountains. Explorers would eventually come to the mountains searching for gold, bringing with them violence, enslavement, and diseases that nearly eradicated the Cherokee people.

Through treaties with England and America, the Cherokee lost three-fourths of their land by the early 1700s. And in 1830, Andrew Jackson signed the Indian Removal Act offering territory out west in exchange for the rest of the Cherokee homeland and forcing 16,000 Cherokees to walk 1,200 miles west on the Trail of Tears. The Eastern Band of Cherokee Indians are descendants of those who remained and fought against this removal. Along with other Cherokees who escaped exile or returned from the west.

Today, the Eastern Band of Cherokee Indians has over 14,500 tribal members who have lived in this region for generations. The Cherokee people continue their traditions of fishing, hunting, and gathering wild foods from the mountains. They also enjoy modern careers.

For more information on the history of the Eastern Band of the Cherokee, you can visit the nearby Museum of the Cherokee Indian. There is also the Oconaluftee Indian Village, a living history museum that portrays a 1760s Cherokee village. 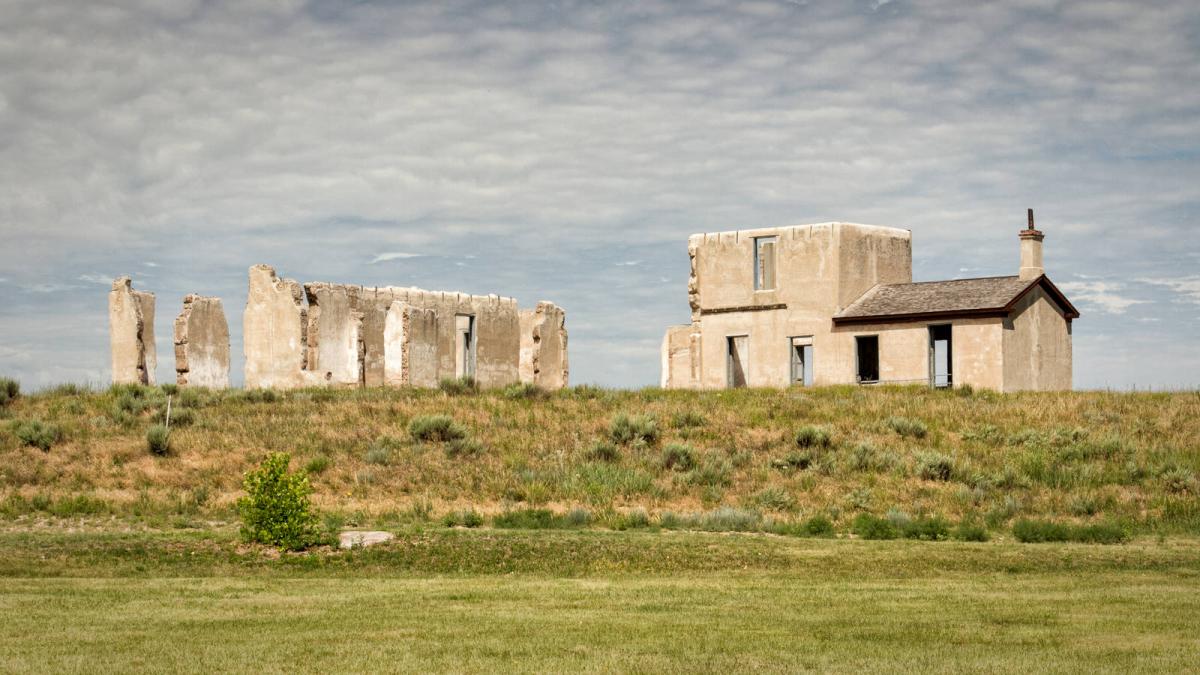 Fort Laramie was the second fort built in a series of forts to protect settlers traveling the Oregon Trail. In its earlier days as a fur trading outpost, Indigenous American tribes, especially the Lakota (Sioux), traded tanned buffalo robes in exchange for varieties of goods. However, relations with the native peoples changed as immigrants, miners, wagon trains, and U.S. troops encroached upon important buffalo hunting areas for the Cheyenne, Sioux, and Arapaho.

In 1849, the U.S. Army purchased Fort Laramie. It became the principal military outpost on the Northern Plains. As conflicts grew, military campaigns started against the Northern Plains tribes, who fiercely defended their homeland against further encroachment. Fort Laramie would then host several treaty negotiations with the Northern Plains Indian Nations, such as the Horse Creek Treaty of 1851 and the still contested Treaty of 1868. The latter lasted until 1874 when gold in the Black Hills saw a rush of miners. From this, the last of the Plains Wars would commence, including the Battle of the Little Bighorn.

As the wars came to a close, the importance of Fort Laramie diminished. However, preservation of the site was secured in 1938 when Fort Laramie became part of the National Park System. 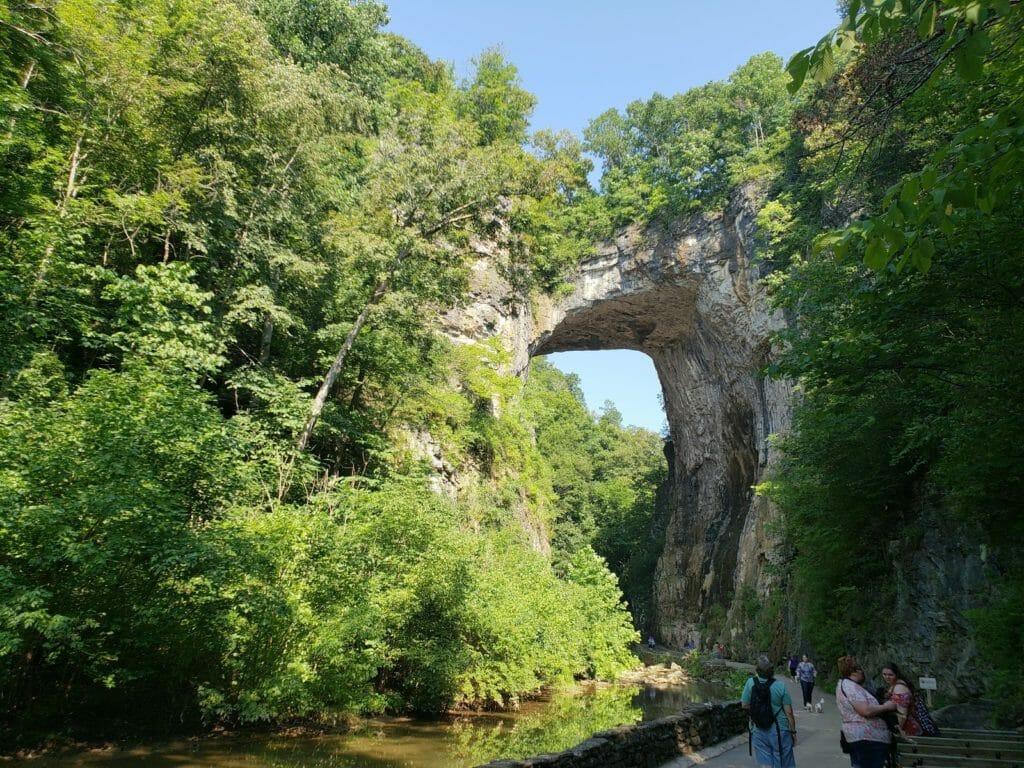 The Natural Bridge was a sacred site of the Monacan tribe, who believed it to be the site of a victory over the Powhatans. During the battle, the stone bridge appeared to help the women and children escape as their men fought back the Powhatans. This story is an oral tradition passed through the Monocans for generations.

The Monocans were a tribe of the larger Virginia Siouans. They lived in villages with palisaded walls, and their homes were dome-shaped structures of bark and reed mats. At Natural Bridge State Park, you can visit a living history recreation of how their villages may have appeared. Monacan ancestors would leave their villages every year to visit hunting camps during times of preparation. They also mined copper, which they wore in necklaces, and traded with the Powhatans.

The TRACK Trail at Natural Bridge State Park follows the Skyline Trail, named for its stunning views of the Blue Ridge Mountains. Nearby is both the Natural Bridge and the Monacan Indian Village, where you can learn about the Monocan people and watch live demonstrations of their way of life. 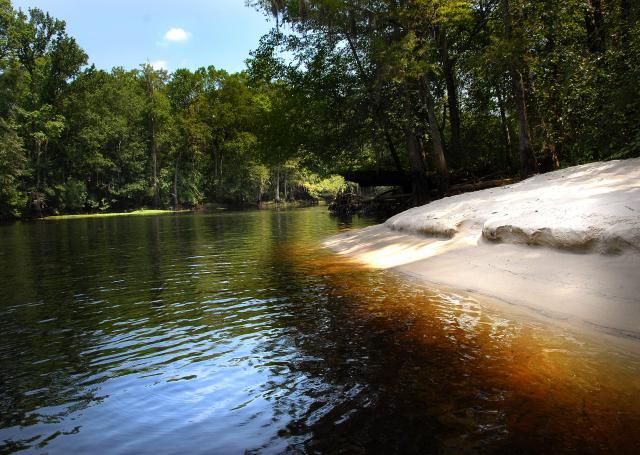 Indigenous Americans have been navigating the rivers and lakes of North Carolina for thousands of years. Archeological findings of the Lumbee ancestors date back to 12,000 BCE. The people of the modern Lumbee Nation are of Eastern Siouan, Algonquian, and Iroquoian-speaking tribes, who all met here at this cultural crossroads. Some native peoples even migrated down from as far as southern Virginia.

The Lumber River (or "Lumbee River" by the tribe) was a haven for those seeking refuge from encroaching colonial forces; the dark waters and swampy terrain were impenetrable to outsiders. Here, displaced Indigenous Americans could take shelter from disease, war, and the general oppression they faced as the United States formed. Today, the Lumbee People are the largest tribe east of the Mississippi, with 50,000 members. When hiking through Lumber River State Park and along the banks of the Lumber River, the dense swamps and woods that protected the Lumbee are still apparent today.

The nearby town of Pembroke hosts the Museum of the Southeast American Indian, located at the University of North Carolina at Pembroke. This school began as an educational institution for the Lumbee Nation to help preserve its identity and heritage.

Information sourced from the Lumbee Tribe of North Carolina and Lumber River State Park. You can visit the TRACK Trails at Princess Ann Access and Chalk Banks Access. 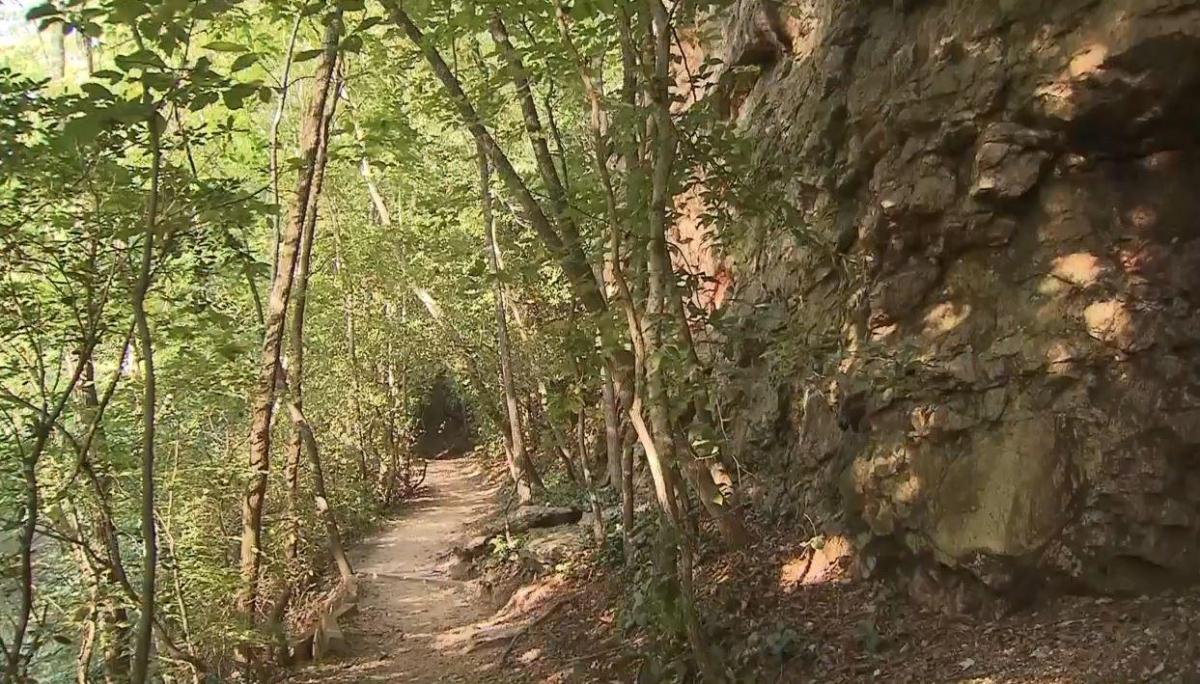 This reserve in the Piedmont gets its name from the Occaneechi Indian tribe, who had a nearby village on the Eno River. The Occaneechi Indian Tribe migrated from the Ohio River Valley, across the Blue Ridge Mountains, and settled in Virginia. Centuries later, during Bacon’s Rebellion, many Occaneechi would be forced to flee as European settlers attacked them to expand their farmland. Some fled to Hillsborough N.C., where they lived in seclusion until they crossed paths with John Lawson, an English explorer, in 1701.

The land along the Eno and Haw River was rich, and the Occaneechi had vast land to hunt buffalo, deer, bears, rabbits, turkeys, and more. As word spread that there was a village where the Great Indian Trading Path crossed the Eno River, Europeans began coming in, forcing the Occaneechi to retreat elsewhere once again. In the late 1770s, the tribe returned, settling in neighboring Alamance County, where the modern Occaneechi Band of the Saponi Tribe resides.

Occoneechee Mountain State Natural Area showcases a diversity of natural communities. The relatively undisturbed forest of the ridge top includes one of the best chestnut oak stands in the region. And, the mountain area itself, adjacent to the upper Eno River, is important wildlife habitat. You can observe how rich this area would have been to the Occaneechi that used to inhabit it.